This is the first part of a small series of blog posts about the upcoming StoreLSM and its design. My take on append-only log files, their compaction, snapshots and rollback.

All articles from ‘LSM Store’ series are under LSM tag.

During the past few months I have been working for IOHK on a new storage engine codenamed IODB. It is based on Log-Structured-Merge Tree and inspired by RocksDB from Facebook. IODB will be mostly used by block-chain applications. I really like LSM Trees and multi-threaded compaction in RocksDB. MapDB will eventually get a new StoreLSM engine, it will replace the old StoreAppend, and will be based on IODB design.

Update is single atomic modification made on store. It inserts or deletes multiple keys. Synonym is Commit. Each Update creates Snapshot identified by version such as V0 or V1.

The linked-list is sequence of Updates linked together. Synonym could be append-only Log.

In Log-Structured store the current state (set of all persisted keys and values) is not stored on disk. Instead it contains a list of all Updates (CRUD operations). We can retrieve all entries for given version,
by replaying all Updates from the start (when store was empty) to the most recent update.

Links go only in a single direction (from newer to older Update), so all traversals have to go from head to tail (from the most recent Update to the oldest Update), Traversal in the opposite direction (from tail to head) is not possible. Special lazy-N-way merge is used to retrieve all persisted keys for given version

Sequence of updates as linked-list

In the figure above an empty store is created at version V0. The next Update inserts keys 1,2,3 and creates the new version V1. There is a link from V1 to V0.

The next update V2 deletes key 2 and creates a link to V1. The next V3 inserts key 4 and adds a link to V2.

To find a key, we traverse a linked-list from the head (most recent update) to the tail (initial empty update). A linked-list traversal finishes when the most recent version of a key is found.

Deleted keys are indicated by ‘tombstones’; that is a special marker done as part of the key update. If a tombstone is found in the linked-list, it means that a key was deleted, and the search returns ‘not found’.

If a key does not exist (was never inserted or deleted), the entire linked-list is traversed and we reach tail (initial empty update). In this case the search also returns ‘not found’.

Search for the key in a sequence of Updates

The figure above shows a simple store with three updates:

As the number of updates grows and the linked-list gets longer, Find Key operation will become slow Also obsolete versions of keys are causing space overhead.

Both problems are solved by merging older updates into a single update. The merge is typically performed by a compaction process, which runs on the background in a separate thread. 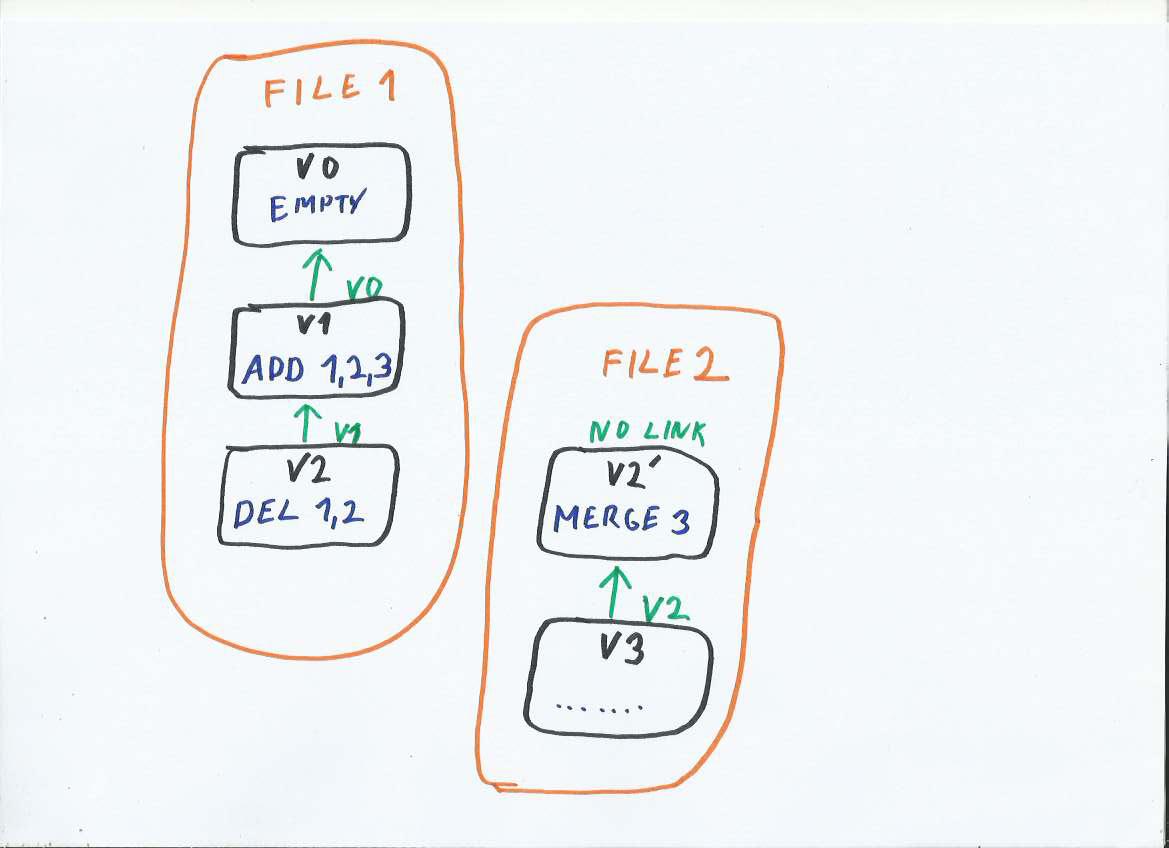 The figure above shows a store with two updates:

The most recent version of the store contains a single key 3.

There is wasted space occupied by inserted keys 1,2 and their tombstone markers. To reclaim this space we perform compaction.

The most recent store state (at V2 TreeSet will contain key 3) is written into a new Update with version V2’. This Update is the first entry in the new file. Basically we created new file, where the first Update is not empty, but it inserts all existing keys from the older file.

V2’ does not have a link to V1. It does not need it, because it contains all keys for given version and a linked-list traversal is not necessary after reaching V2’.

At this point we have two files: Older File 1 and newer File 2. It is safe to delete old File 1, as all data are contained in the newer file We also have two version with the same Version Identifier (V2 and V2’), this collision is resolved once the old file is deleted.

The analogy with compaction and TreeSet section is broken. A linked-list cannot really be traversed from tail to head, as all links go only in opposite directions. Also TreeSet is inefficient and all keys would not fit into memory.

Instead, compaction uses more effective lazy-N-way merge. I will describe it in more detail in a future blog post. In short:

Most databases can rollback uncommitted changes. While inserting data into the database, you may decide to rollback or commit dirty (not yet saved) data.

LSM Store supports this scenario in more powerful way. Each update (commit) creates its own snapshot. It is possible to rollback several existing commits, and revert the store to an older version. This older version can then me modified independently in a separate branch. Original (rolled-back) data are not really lost, but are preserved in separate snapshot. Version Control System, such as Git, works in a similar way.

When rollback happens, the linked-list becomes a linked-tree with multiple heads. Each head represents one branch of updates. 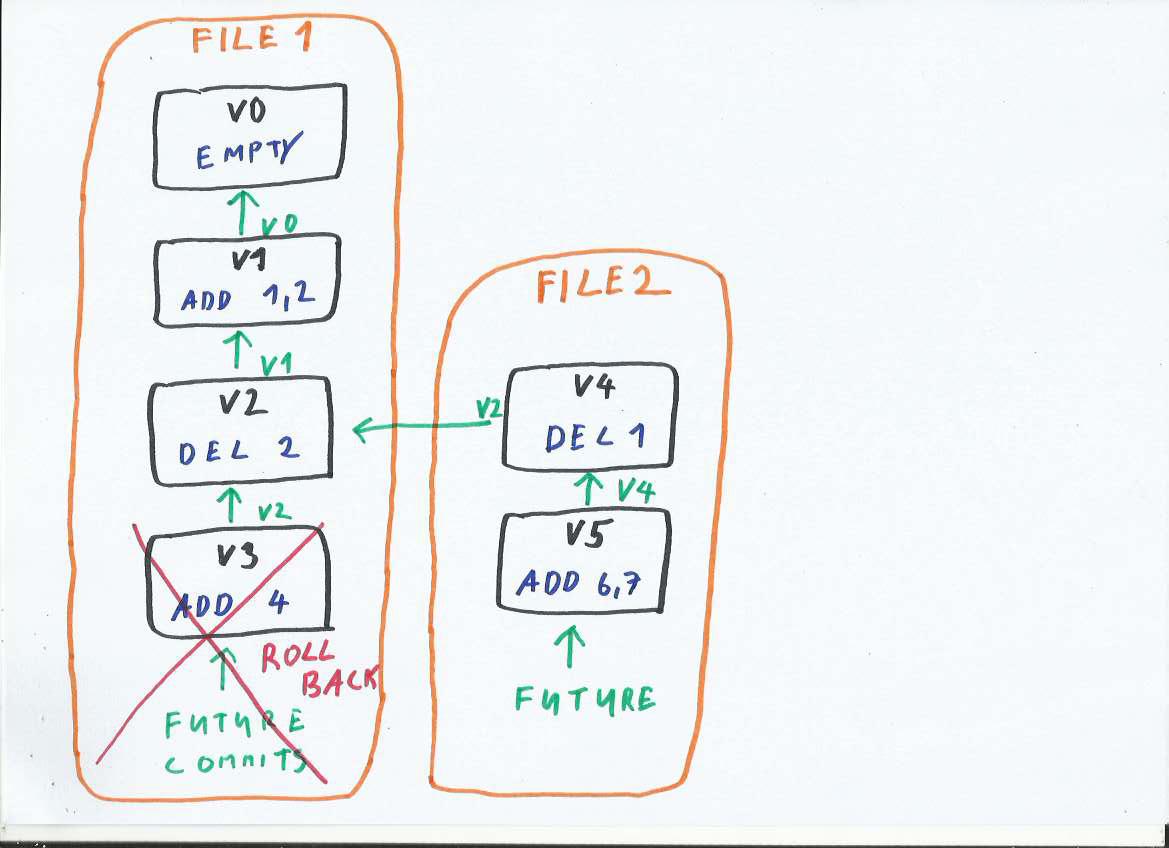 The figure above shows such use case. We have a store with updates V1, V2 and V3. The last update V3 is rolled-back. And the linked-list will create a new branch from V2.

All updates are stored in File 1. This file is append-only, V3 was already written into the file, so we can not truncate the file and discard data from V3.

So the data from V3 will be preserved, but bypassed. We start the ‘new branch’ V4 with a direct link to V2. The skip-list with head V4 does not contain changes from V3.

There are multiple options where to place V4:

So this LSM Store supports a classic rollback, but it can also create branches from older snapshots. It is similar to Git (or other VCSs). Data can exist in multiple versions and branches. All versions are preserved and can be queried or modified.

Snapshots and branches are necessary for blockchain applications. In this use case multiple branches exist concurrently, until the consensus algorithm decides which branch wins and becomes the new main branch.

The upcoming StoreLSM will support branching as an optional feature.

In this post I have been quite vague about how Updates (data chunk created by each update/commit) are organized into files. It depends on the usage pattern. I will go into more details in a future post, but for now I expect three usages: